Discount automatically applied to the Original, Hybrid, and Legend mattresses. Excludes the Studio mattress and Bundles.


10% Off Bases & Bedding with code COMFORT

1. Add qualifying bases and bedding items to your cart.

2. Enter promo code COMFORT at checkout to receive the discount.

3. The qualifying items will display the relevant discount.


Offers not valid on previous purchases or pending orders. To qualify, all items must be purchased as part of the same order. Offers valid for orders placed directly on Leesa.com or from direct-order telephone sales. Offers not valid for purchases made at third-party retail stores. Previously purchased items currently under the one hundred (100) night trial cannot be returned and redeemed with this coupon. Cannot be combined with other offers. Additional restrictions may apply. Promotion is subject to change at any time without prior notice.

Big spoon. Little spoon. The leg hug. Or maybe just back to back. There are more than a few ways to cuddle with your partner at night, and each one may offer a little bit of insight into where you are in your relationship (or at least how you're feeling that particular evening).

Did you know there are scientific reasons–and benefits–for why some people prefer to cuddle at night? The intimate connection created by being so physically close releases hormones in the brain that not only make us feel good at the moment, but they also could help boost the immune system and reduce feelings of anxiety.

On the spectrum of little spoon to maintaining your personal space at all costs, where does your relationship fall on the cuddling spectrum, and what does that say about you or your partner? To find out, we polled over 1,000 people about the positions they most preferred at night, how happy they were with their significant other, and how often getting close between the sheets led to something more. Read on as we untangle their responses.

Better Together During Bedtime 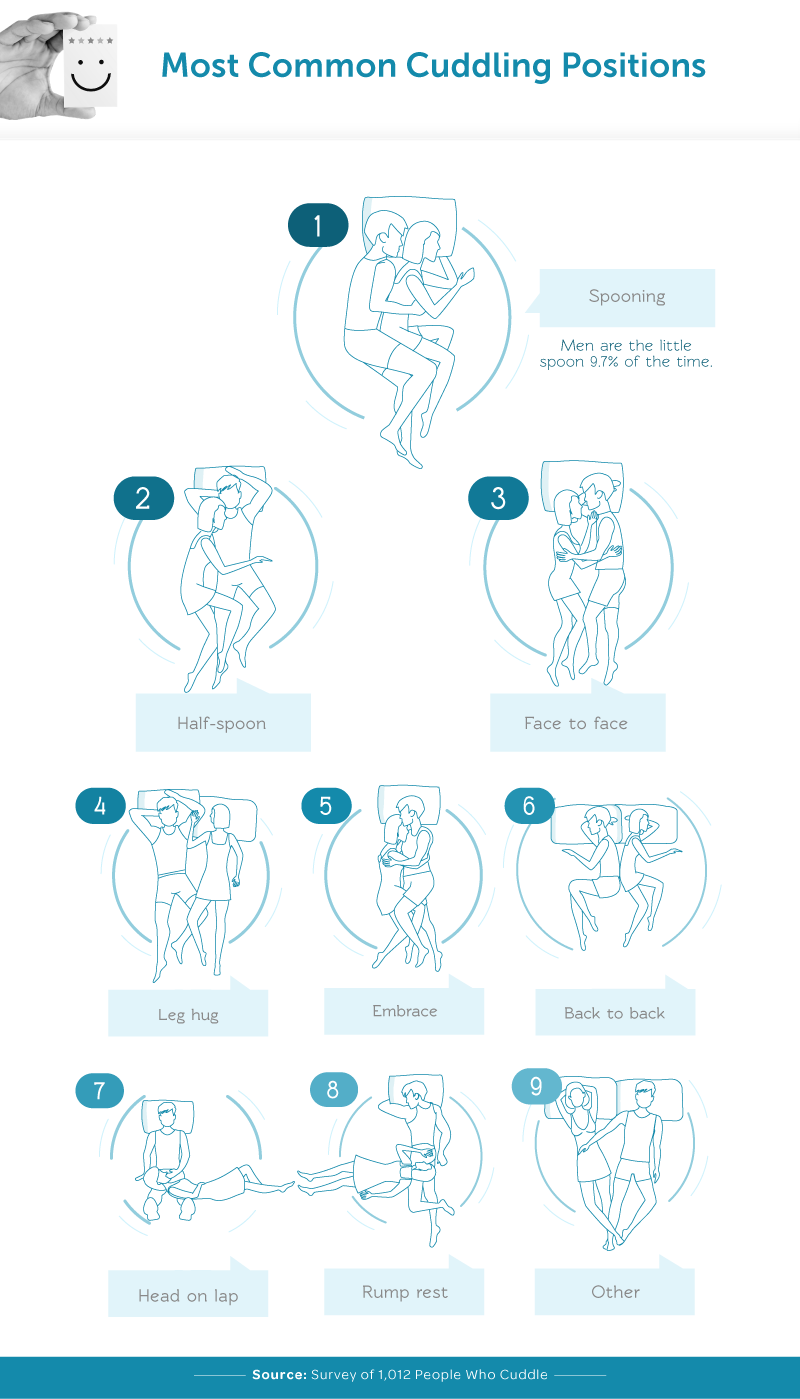 When you finally crawl into bed at the end of the night, maybe you like the feeling of being enveloped by your partner. Perhaps the pressure gives you a sense of safety, or being cradled against their frame is just a comfortable sleeping position. Whatever the reason, if you like being the little spoon at night, you're not alone. Whether filling the role of the little spoon or big spoon, men and women said spooning was their most common go-to cuddling position.

You might assume the larger between two people would always opt for the big spoon by default, but that isn't always the case – men sometimes prefer to be the little spoon. Whether it's a product of how they're feeling at the moment or simply an expression of their personality, there's no rulebook on how couples are supposed to sleep.

For everyone else, the half-spoon position, face to face, leg hug and embrace also ranked among the most common cuddling positions. The embrace might be one of the most intimate ways to get close to one another while sleeping, but it typically only lasts through the "honeymoon phase" of the relationship. 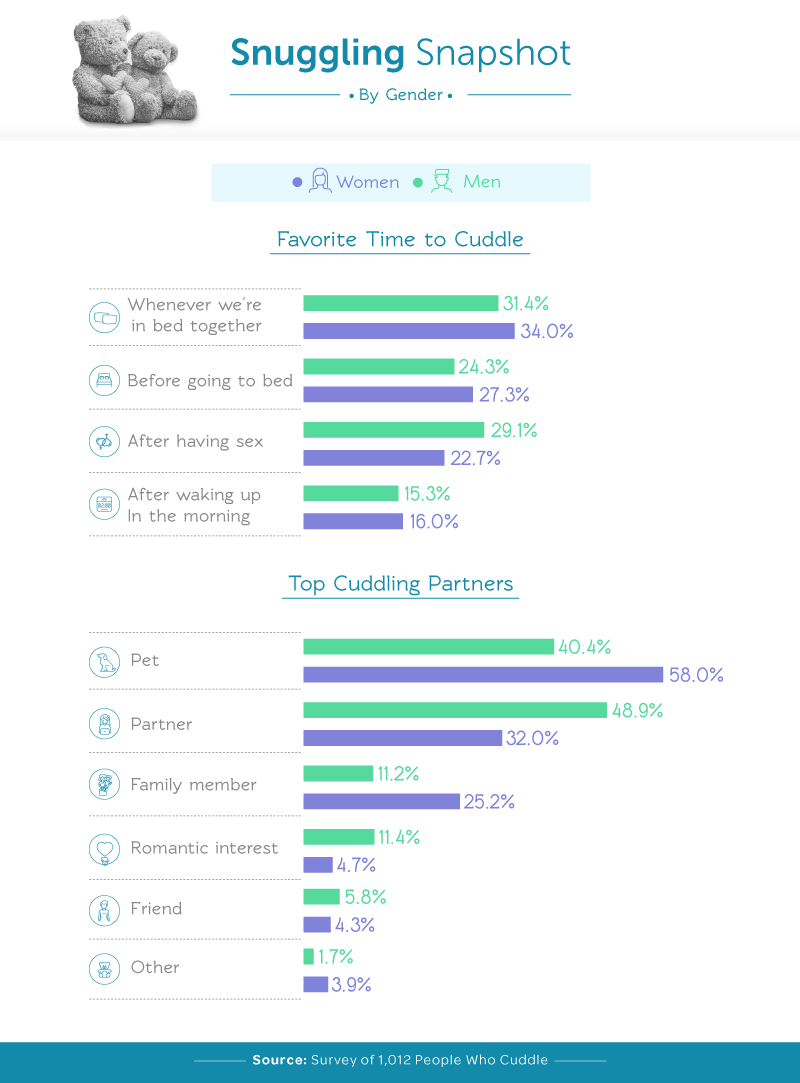 Depending on how long you and your partner have been together, you may have reached a point where not every minute in bed has to be a full-on cuddle session. For some couples, cuddling helps sets a different mood and may not always involve another person.

Roughly 1 in 3 people said they preferred to cuddle with their significant other any time they were in bed together. That might mean defaulting to big spoon or little spoon or navigating to a less invasive arm drape or leg hug before finally falling asleep. For over 27 percent of women and 24 percent of men, cuddling as an activity was best just before going to bed.

Whether you're single or just prefer man's best friend, 58 percent of women admitted they preferred to cuddle with their pets, and nearly 20 percent of women liked to sleep closely with a family member (including their children).

While women had a slightly more favorable position on cuddling in casual situations, men were more fond of this intimate action when things were, well, intimate. Over 29 percent of men and nearly 23 percent of women said they preferred to cuddle after having sex.

If you're trying to send a clear signal you're in the mood for more than just sleeping, cuddling could relay that message.

While men (79 percent) were more likely to be physically aroused by cuddling, over 66 percent of women wanted more than snuggles after the spooning started. Considering cuddling triggers the release of dopamine (the "feel good" chemical) in the brain, it's no surprise being physically close occasionally elicits a more intimate response.

If you're looking to get even closer with your significant other, certain cuddling positions could be more beneficial than others. People who had more sex each week, on average, were fonder of the rump rest position (resting your head on your partner's backside for support), the head on lap, the embrace, and lying back to back.

Those same positions might not always be the best overall, though. While the big spoon and little spoon positions were both popular among satisfied couples, the little spoon and half-spoon positions for men and the leg hug position for women were more commonly preferred among people who were happy with their partners.

Where Mattress Size Matters in Sex 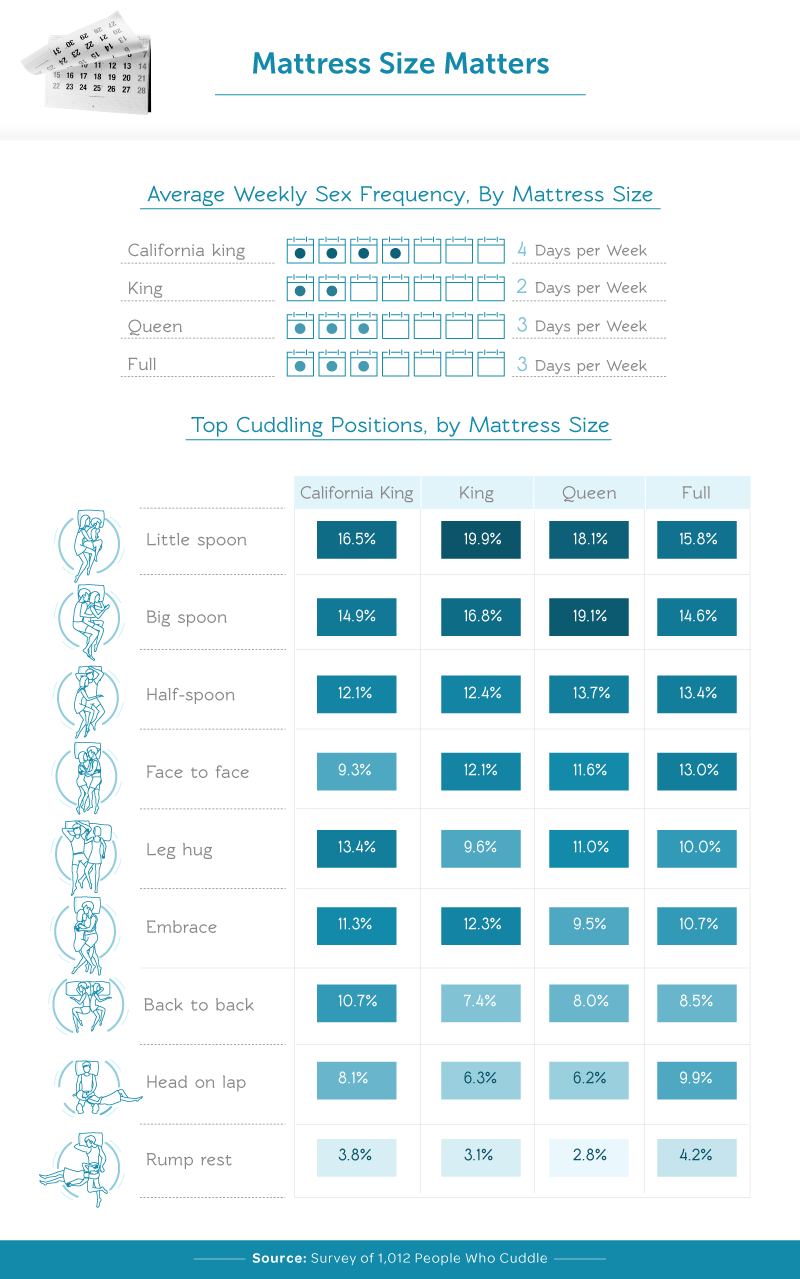 Often there's more that goes into how often you have sex than the positions you prefer to cuddle.

Studies have shown some couples recognize their mattresses are the "weak link" in their ability to get a good night's rest, and not having enough space to stretch out and feel comfortable could be a part of the problem. In fact, people sleeping on California king-sized beds had sex four days a week on average.

While most couples preferred sleeping in some spoon variation, having a little extra room to play with could help expand your snuggle selection. Those with California king-sized beds were more inclined toward sleeping in the leg hug or back to back position than those with smaller mattresses. 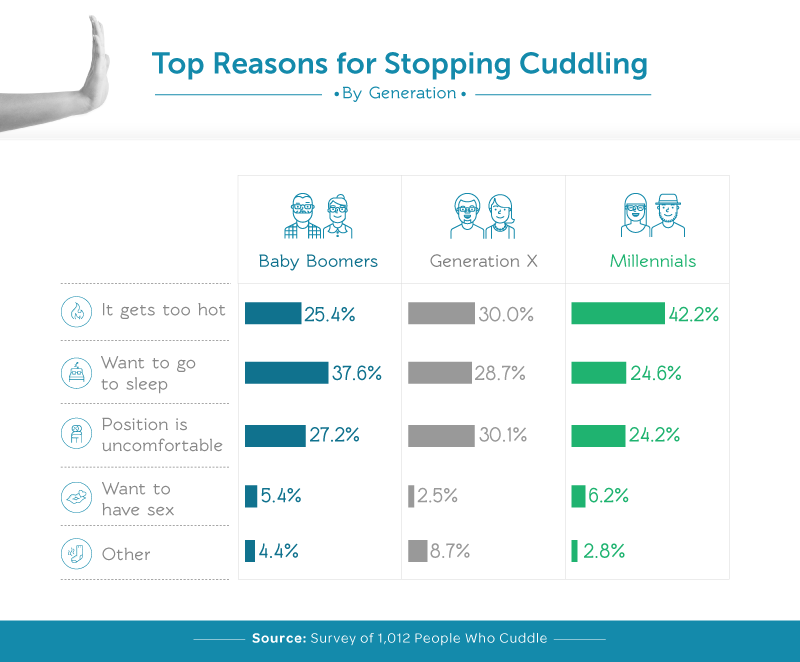 If you find yourself kicking off the blankets in the middle of the night or waking up shivering because it's suddenly gotten too cold, that doesn't always mean your thermostat is broken. There are actually scientific reasons why the body changes temperature throughout the night, and not everyone experiences those shifts the same way. It's normal for your temperature to drop between one and two degrees before bedtime to help you stay asleep throughout the night. When it's time to wake up, the body generally gets warmer instead.

For more than 42 percent of millennials, 30 percent of Gen Xers, and 25 percent of baby boomers, feeling too hot was one of the biggest reasons they didn't want their significant other getting too close while they were trying to fall asleep. Body heat may be one reason why you can't fall asleep comfortably at night; other factors could be your mattress, bed linens, and pajamas.

For older couples, cuddling became too uncomfortable or the allure of sleep overtook them. Millennials were the most likely to say they stopped cuddling in order to have sex.

The Better Choice for Any Sleeping Position

Whether you like a little cuddling before bedtime or want to spread yourself out as much as possible, there are more benefits to snuggling at night (with your partner, pet, or even pillow) than just finding a comfortable sleeping position. Cuddling helps trigger the release of chemicals that not only make us feel better about the person (or pet) we're sharing the bed with but also lead to a better night's sleep. In some cases, how you choose to lay with or on each other could signal you're in a satisfied relationship.

There's one other major factor that could be playing into how well you sleep at night: your mattress. At Leesa, we've redesigned the sleeping experience. Our mattress has been specially formulated to give you the comfort, support, and universal feeling everybody needs to sleep better in every position. Try the difference for yourself with our 100-night risk-free sleep trial or visit us at Leesa.com to learn more.

We collected responses from 1,012 people using Amazon's Mechanical Turk. 56.1% of participants were female, and 43.9% were male. Participants ranged in age from 18 to 83 with a mean of 32 and a standard deviation of 11.24. Participants were excluded if they never cuddled or were clearly not paying attention (e.g., failed attention check question or entered obviously inconsistent data). We weighted the data to the 2017 BLS data for age and gender of Americans. No statistical testing was performed. Assets that include "spooning" as a position are a result of combining the "big spoon" and "little spoon" responses.

The data we are presenting rely on self-reporting. There are many issues with self-reported data. These issues include but are not limited to the following: selective memory, telescoping, attribution, and exaggeration.

Ready to get under the covers? Feel free to share the results of our study with your readers for any noncommercial use. Just keep things cozy by adding a link back to this page so that our contributors get credit for their work too.