Buy One Pillow or Sheet Set, Get One Free with code COZY

2. Enter promo code COZY at checkout to receive the discount.

3. Each redeemable item will display as Free in checkout.


Offers not valid on previous purchases or pending orders. To qualify, all items must be purchased as part of the same order. Offers valid for orders placed directly on Leesa.com or from direct-order telephone sales. Offers not valid for purchases made at third-party retail stores. Previously purchased items currently under the one hundred (100) night trial cannot be returned and redeemed with this coupon. Cannot be combined with other offers. Additional restrictions may apply. Promotion is subject to change at any time without prior notice.

Have you ever found yourself lying awake in bed cursing the relationship norms that have bound you to share while your partner snores like a chainsaw or tosses and turns like a moonlighting acrobat?

If so, you're not alone.

Sleeping together is part of the logical progression of couplehood, but there is no shortage of reasons to consider exploring the option of separate beds to eliminate nighttime strife. While curling up next to someone you love is a great way to feel warm and fuzzy inside, sleeping side by side can give way to an entirely different type of incompatibility.

We surveyed over 1,000 Americans to learn more about how sharing a bed affects their sleep and if sleeping together is the best arrangement for them. Plus, we discovered the main points of contention that drive sleep partners crazy – read on to find out what they are!

I Just Want to Sleep Alone ... 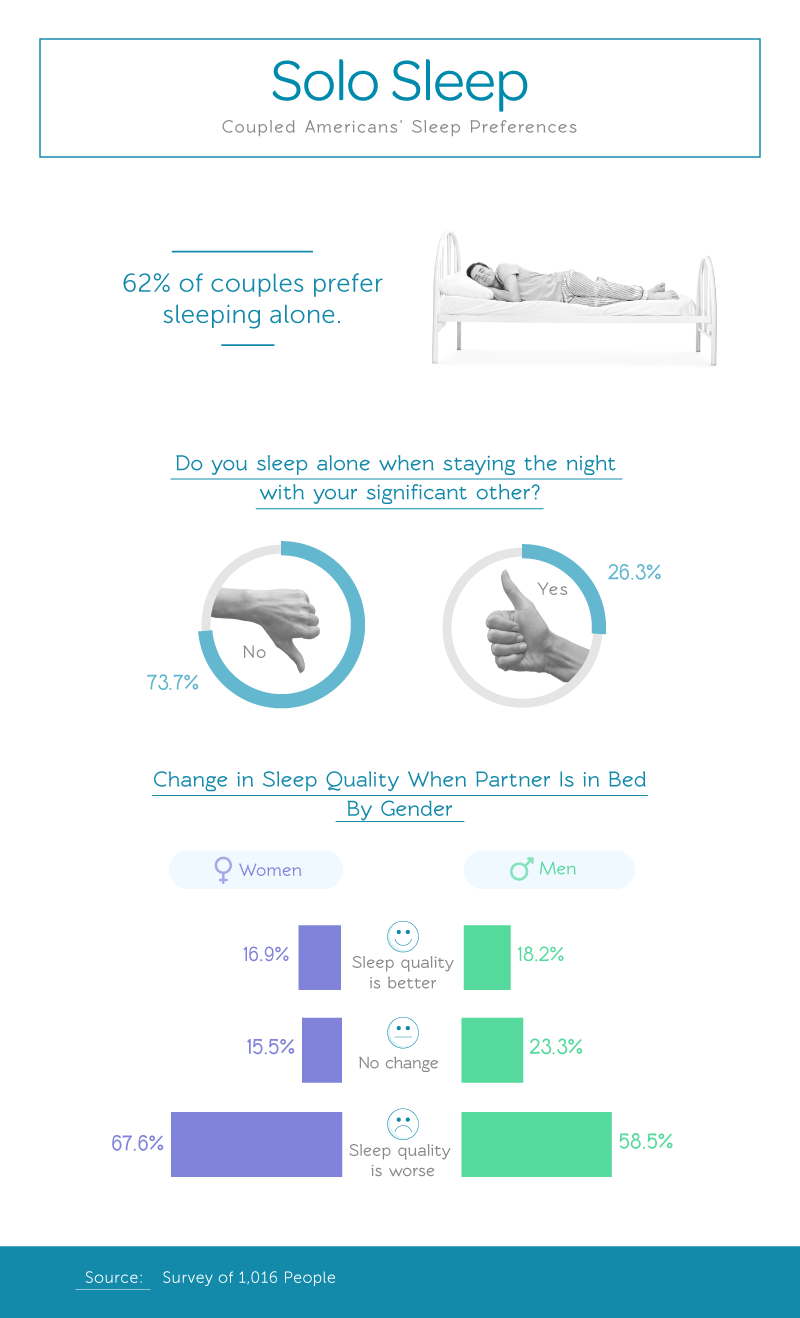 The grand majority of Americans prefer to sleep next to their partner: Just 26.3 percent of our respondents said that they did not share a bed with their other half.

According to a recent study, sharing a bed can mean different things for sleep quality depending on the situation: The amount of time spent sleeping went up when people slept together, and a more rapid descent into deep sleep was observed. However, given that people's sleep stages were prone to synchronization, one-half of the couple tended to downgrade their sleep quality if their partner was, for example, an insomniac. The average American would ideally dedicate just under half of the month to solo sleeping. However, nearly a third of those who wanted the bed to themselves were too nervous to broach the subject with their partner. 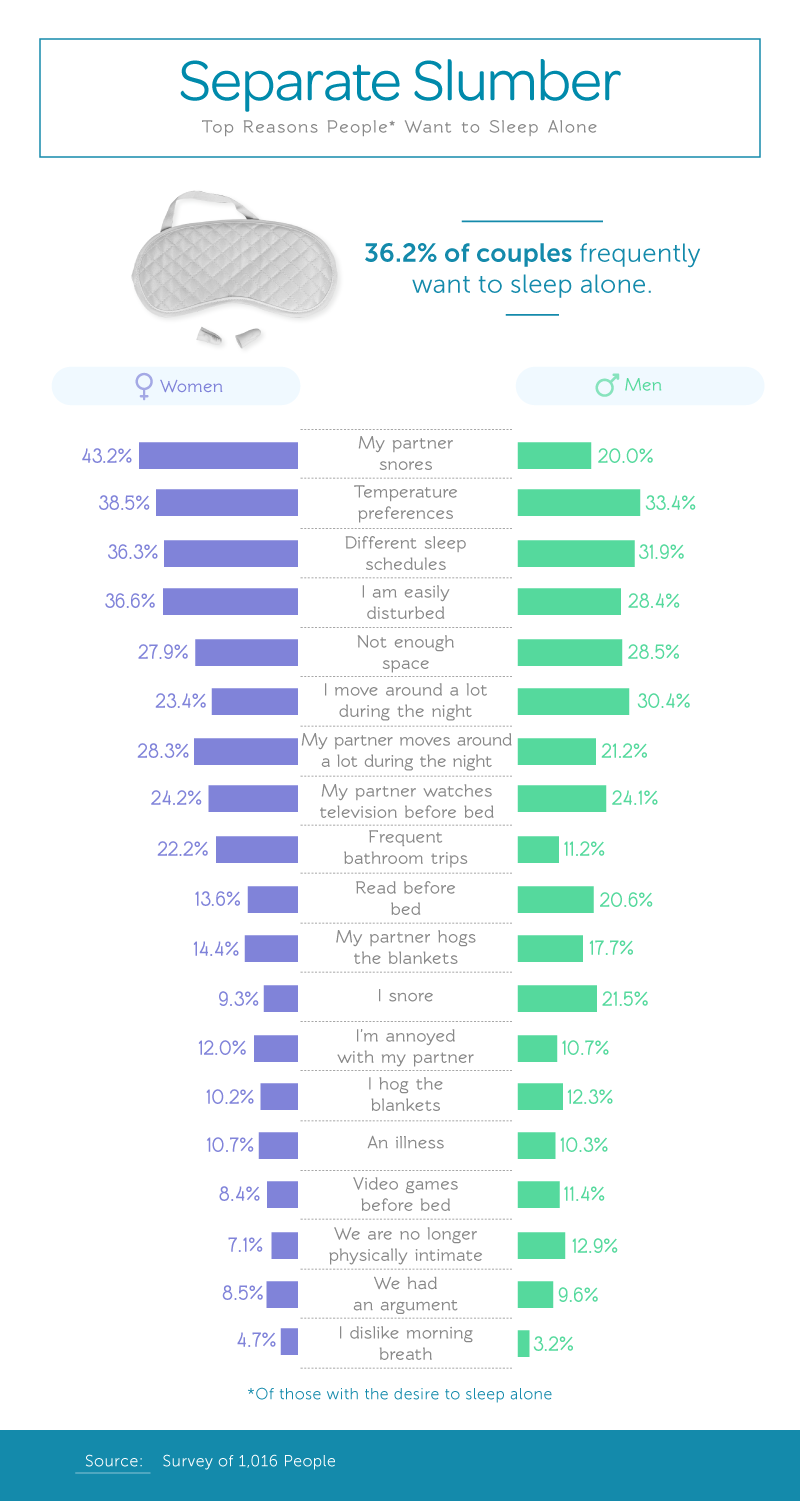 Women put up with the disruptive snoring much more frequently than men: Due to certain biological factors, males are much more prone to snoring. This bedtime disruption was the leading reason behind our female respondents' urges to sleep alone, with 43.2 percent having experienced the desire to flee in the face of snoring.

In general, women are also more prone to feeling chilly than men, leading to 38.5 percent of our female respondents citing temperature preferences as a core reason behind wanting to sleep in separate beds. Men listed this difference as their No. 1 factor behind the urge to sleep alone, at 33.4 percent.

Men also cited different sleep schedules as their second most common bedtime issue (31.9 percent), and although women reported the same gripe at a higher rate (36.3 percent), it only made fourth place on the latter group's list. 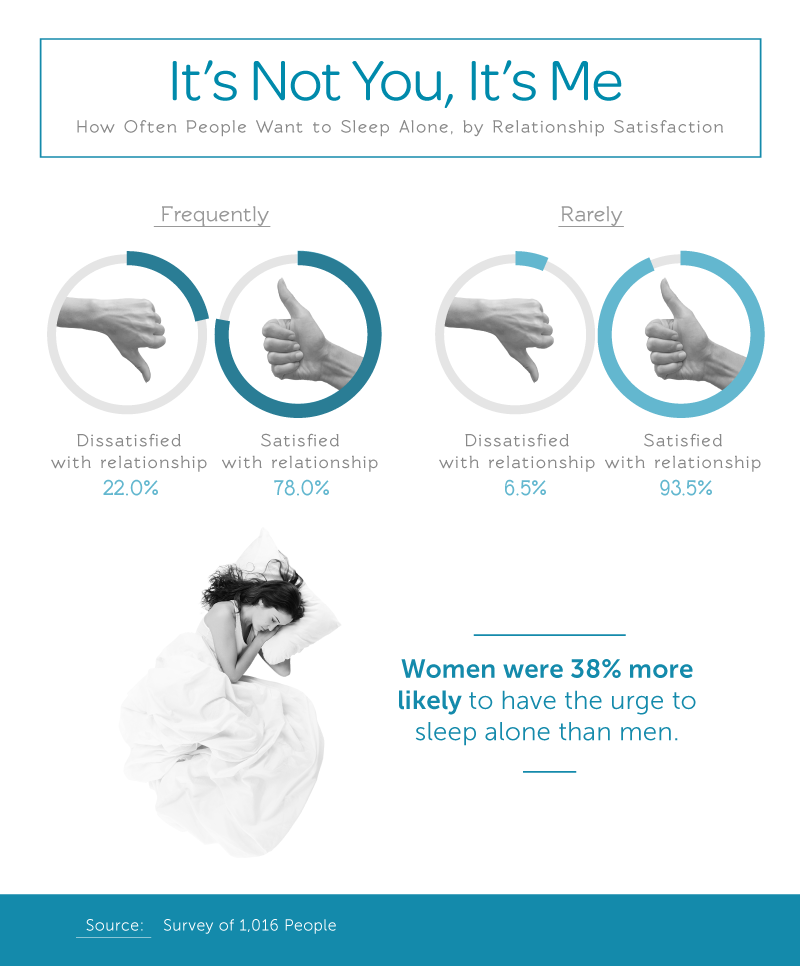 You would think that the urge to sleep alone would come from a place of relationship dissatisfaction, right? Maybe not. Among respondents who reported a frequent urge to sleep in their own bed, 22 percent of them were not feeling great about their relationship, but 78 percent were completely satisfied.

On the other hand, 93.5 percent of people who were satisfied in their relationship rarely had a hankering for solo sleep, compared to just 6.5 percent of dissatisfied partners.

While parting ways for the night hardly sounds like a pattern that would be adopted by a happy couple, sleeping separately has actually been found to strengthen people's relationships in many cases. Having their own space, reconciling different work schedules, and banishing snoring issues were just some of the positive side effects enjoyed by separated sleepers. 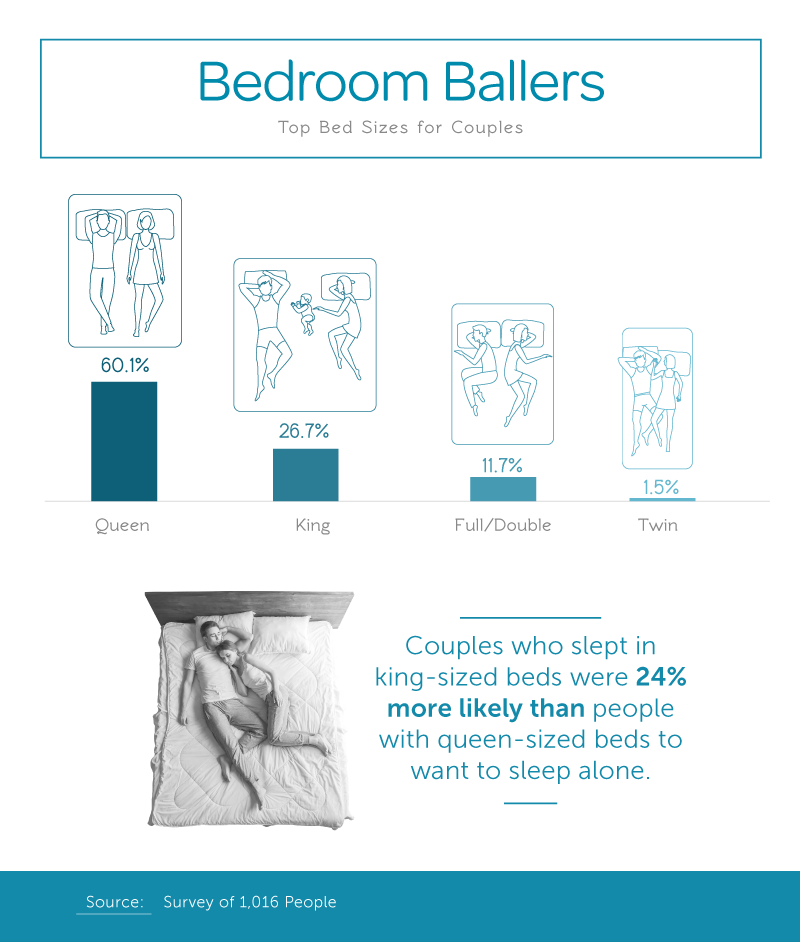 If your partner tosses and turns, flails around, or adopts a freefall stance in their sleep, chances are you'll want to purchase the largest bed possible to stay out of their strike zone. For the bulk of our respondents (60.1 percent), that translated to a queen-size bed.

Another 26.7 percent shared a king-sized bed, and 11.7 percent snuggled up in a full or double bed. And while they were in the extreme minority, 1.5 percent of couples shared a twin-sized bed akin to those from the college dormitory days.

Whether you've got the expanses of a king-sized mattress beneath you or a little less bedroom real estate between you and your partner, here's how to effectively share a bed for hassle-free sleep!

Sleep Is of the Essence 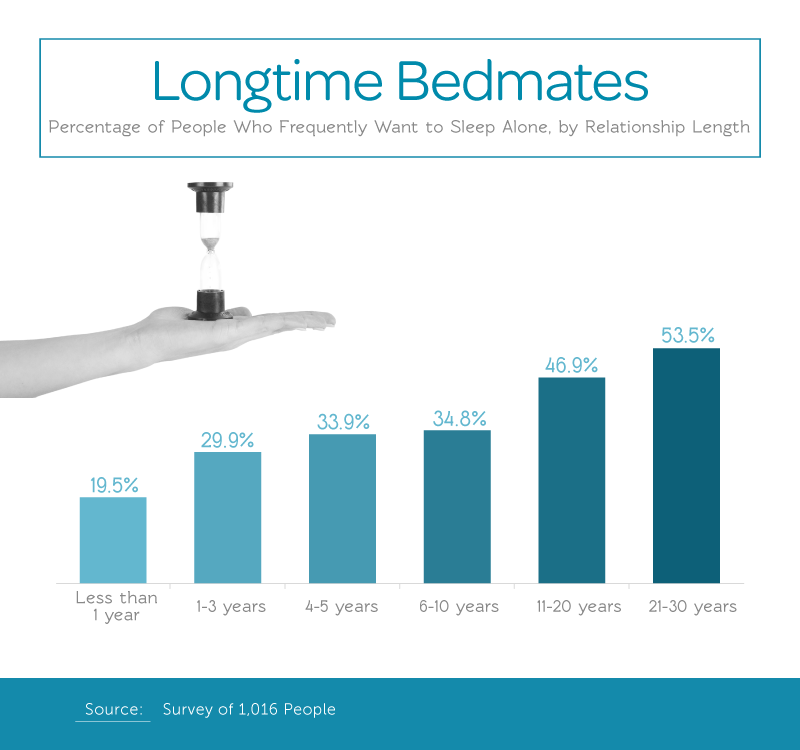 Ah, the youthful glow of the honeymoon phase… a period at the start of every partnership during which your partner can do no wrong, staring into each other's eyes is a certified hobby, hand-holding is standard protocol, and being apart feels like some form of modern torture. Oh, and sleeping in the same bed as your new squeeze is one of life's greatest luxuries – until it's not!

Only 19.5 percent of people in relationships less than one year felt the urge to sleep in separate beds, jumping sharply to 29.9 percent from years one to three. Respondents' desires to ditch the co-sleeping setup underwent no significant change until just after year 10, at which point the urge to run for the spare room spiked sharply.

Relationships that were 11 to 20 years long had 46.9 percent of people fed up with sleeping side by side, and a whopping 53.5 percent of 21- to 30-year relationship veterans felt the same.

There are dozens of reasons why sleeping alone could be a beneficial choice for many. Our respondents' sleep quality was greatly reduced when their partner was snoozing beside them, and they had no shortage of qualms about their partner's disruptive bedtime habits.

Snoring, space-hogging, varying body temperatures… no wonder the frequency of couples' urges to sleep separately skyrocketed as the years went by. However, even with all of this data building a case against couples sleeping together, only a quarter of our respondents currently sleep solo – although that may be due in part to a fear of telling their partner how they really feel about sharing a bed.

Regardless of your relationship status, you'll never be sleeping alone if you have a Leesa mattress. You've got a friend in both of our well-loved models: multilayer foam and a snazzy hybrid material. If your next mattress comes from Leesa, not only will you have the best rest of your life, but you'll help someone else do the same: For every 10 mattresses sold, one is donated to a sleeper in need.

For this study, we polled 1,016 Americans via Amazon's Mechanical Turk. Our respondents were 54 percent female and 46 percent male. We weighted the data to the 2017 U.S. census for age and gender. Participants who were single, widowed, or divorced were excluded from the analysis. The data presented in this project rely on self-report. There are several issues that come with self-reporting, including but not limited to the following: exaggeration, selective memory, and attribution.

We encourage the sharing of our graphics with your audience for noncommercial purposes only. Just don't hog the covers and the credit. Give the credit where it's due by providing a link back to this page and citing the authors for the study.