There are few things more satisfying than climbing into bed after a long day. The chance to stretch out and relax is priceless to many, and a good night's slumber is beneficial for both mental and physical health.

However, if you have a partner, he or she may have some annoying bedroom tendencies. We're talking about burping, playing with gadgets, or eating in bed, all of which can make it hard to settle down for a night of quality sleep.

We polled 983 people about the bedroom habits they found most annoying, whether they established bedroom rules to combat these annoyances, and whether said rules were followed. Let's take a look at how the rules are written in our bedrooms. 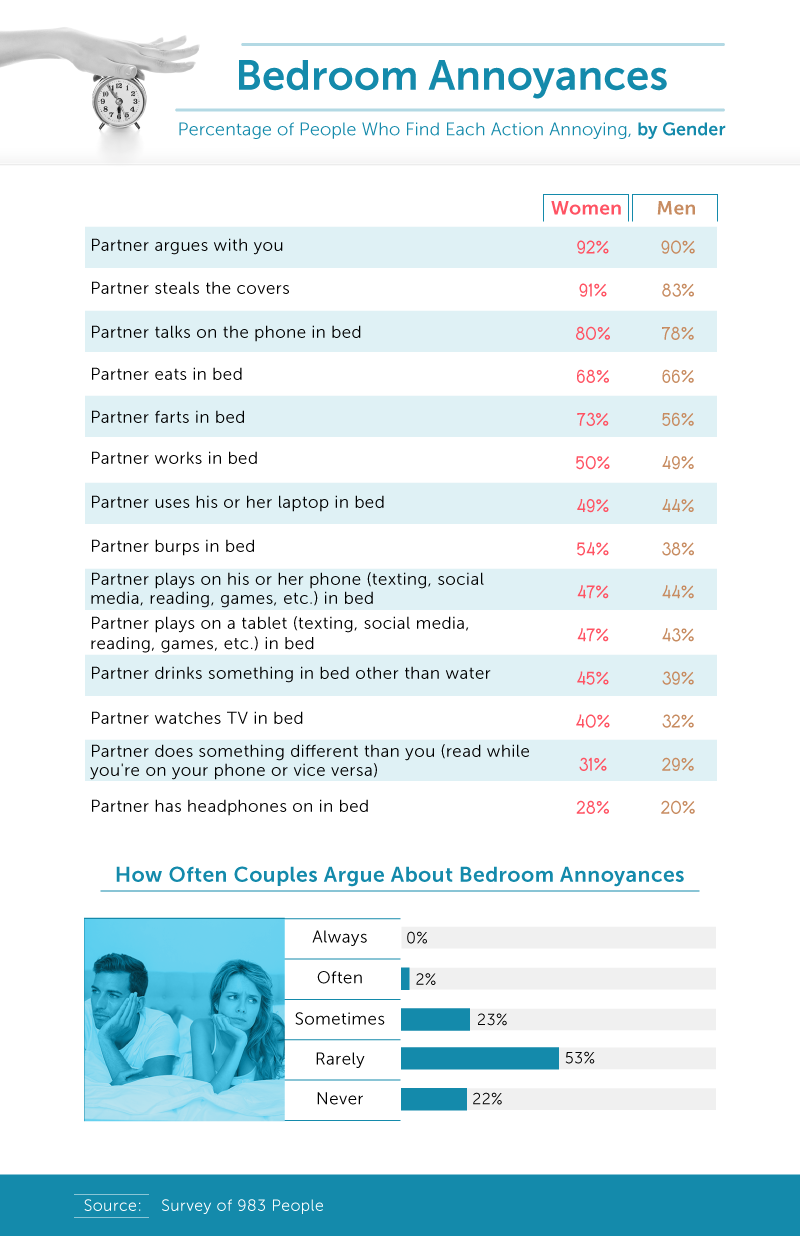 First, we asked respondents to think about what their partner did in the bedroom that annoyed them most. First on their list was when their partner argued with them. Both men and women mentioned this frustration most frequently, at or above 90 percent for each gender. In addition to being annoying, studies have found arguing before bed can make your conflict even worse, backing up the advice to not fight before you snooze.

Other activities that got on people's nerves were eating in bed, playing on a smartphone or tablet, and drinking something other than water in bed (because really, who needs wine or soda stains in the sheets?). These were fairly equal between the genders, but there were a few categories where there was a greater divide.

Enter the farts and burps. Quite a few (73 percent) of our female respondents reported being annoyed by their partner farting in bed, while men seemed to have less of an issue with this transgression (56 percent). The same applied to burping: 54 percent of women were annoyed with their partner burping in bed, while 38 percent of men reported the same. And the gender divide didn't stop there – more women (91 percent) than men (83 percent) even reported being annoyed at their partner for stealing the covers. 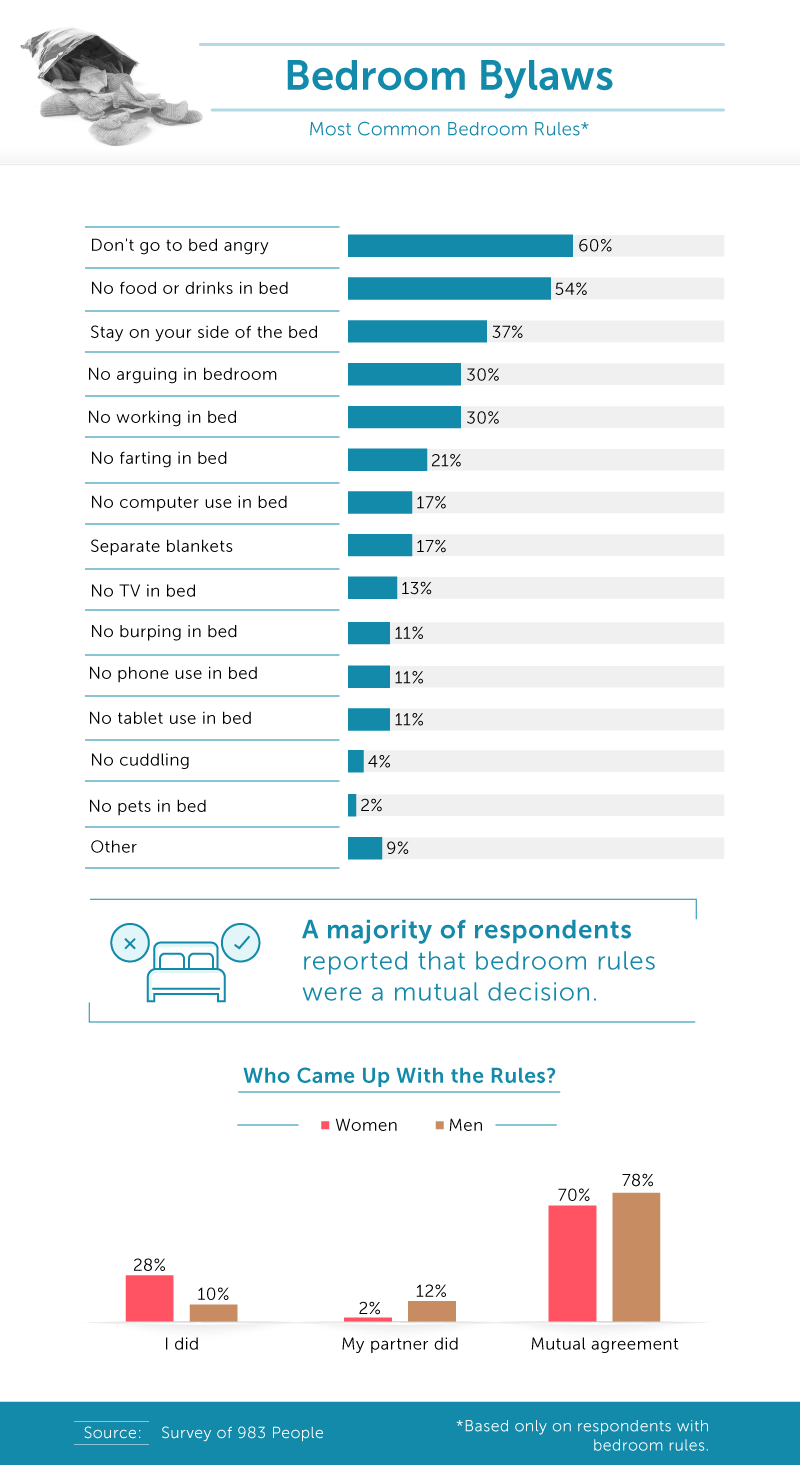 So once annoyed with their partner's behavior in the bedroom, what steps did respondents take to get a more pleasant night's sleep? For starters, a whopping 75 percent of our respondents didn't create any bedroom "rules" at all. For the 25 percent of people who did, though, their rules were not entirely surprising, considering the list of complaints above.

We found most people instated a rule not to go to bed angry. There is indeed a kernel of truth to this notion, as we discussed previously: Arguments before bed can worsen the conflict at hand (not to mention the resulting stress can wreck your sleep).

Other rules that stood out were no food and drinks in bed (54 percent), staying on your side of the bed (37 percent), and no farting (21 percent) or burping (11 percent). Women were also more likely to instate these rules than men. 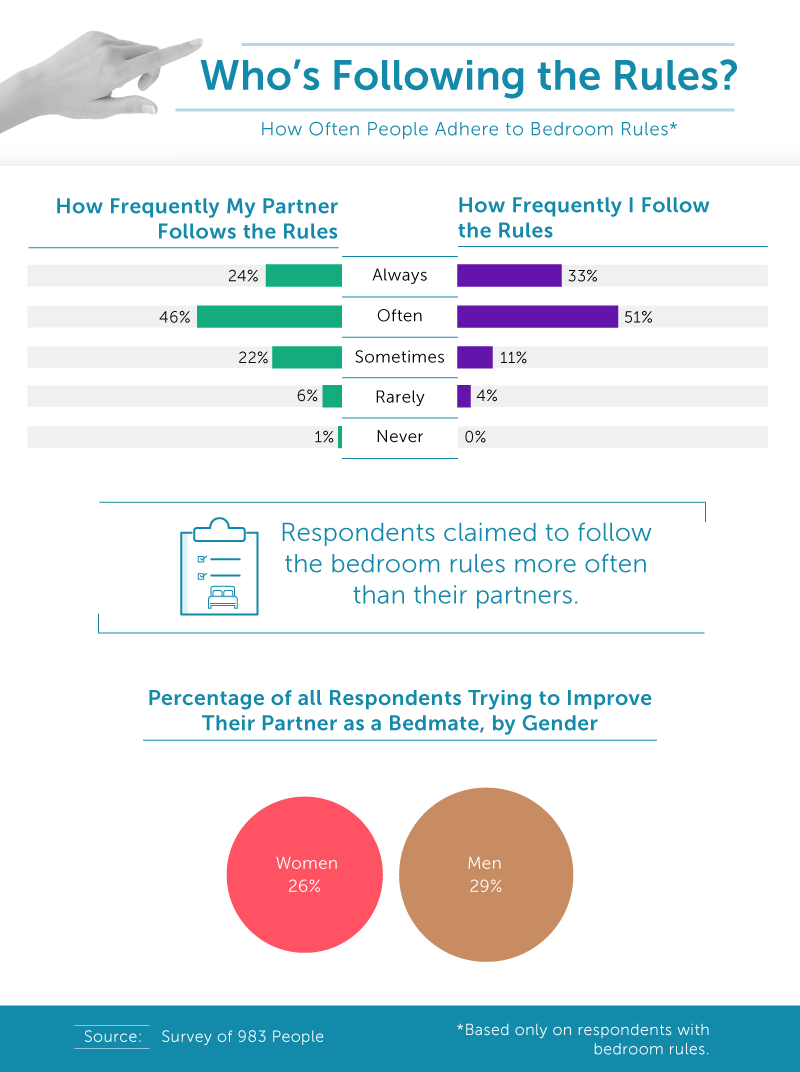 For the people who did have bedroom rules in place, we looked to see if there was any disparity between the genders. For example, when asked how often their partner followed the rules, most respondents indicated they "often" did. However, those same respondents followed the rules at a greater rate ("often") than their partners (a 5 percentage point difference in this category). This could be a simple matter of perception: If you're actively monitoring whether someone is following the established rules, it may make more of an impact if said rules are broken. On the flip side, you may feel you're following the rules just fine, but in the event of a slip-up, your partner may take more notice.

Additionally, men, more so than women, were more interested in altering their partner's bedtime behavior, even though women tended to be the person who was more involved in establishing bedroom rules in the first place. This tendency mirrors what are considered to be traditional gender norms, which see men feeling a need to have more influence in their relationship than their female partners.

Last Thing Before Lights Out 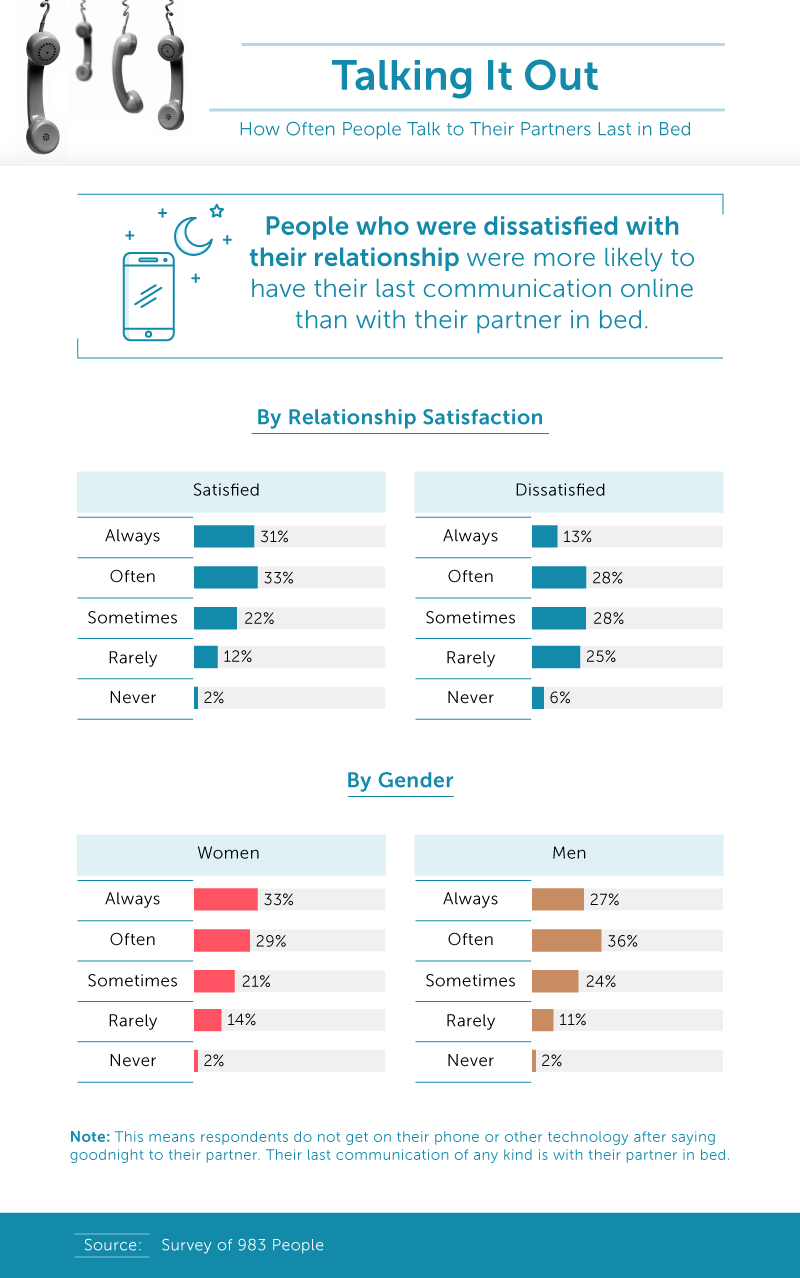 Before you shut your eyes and go to sleep, what is the last thing you do? Do you lovingly say goodnight to your partner or pop on your phone to do a little browsing? Are texts the last thing you do, or do you kiss your partner before falling into precious slumber? We asked how often respondents' last communication of the day was with their partners. Quite a few people who were satisfied with their relationship said they always (31 percent) or often (33 percent) talked with their partner last in bed. Others were not quite as committed – instead, they reported sometimes (22 percent), rarely (12 percent), or never (2 percent) having their final interaction of the day with their partner.

On the other hand, unhappy folks were less likely to save their final communication for their partner, instead turning to texting or checking social media before they shut their eyes for the day. Only 13 percent of unhappy respondents did so all the time, and 28 percent did so often.

Twenty-eight percent of dissatisfied people also said they sometimes reserved their final interaction for their partner, with 25 percent rarely doing so, and another 6 percent never doing so. Taking all of these data into consideration, it's far more likely an unhappy partner will not save his or her last communication for a partner before calling it a night. 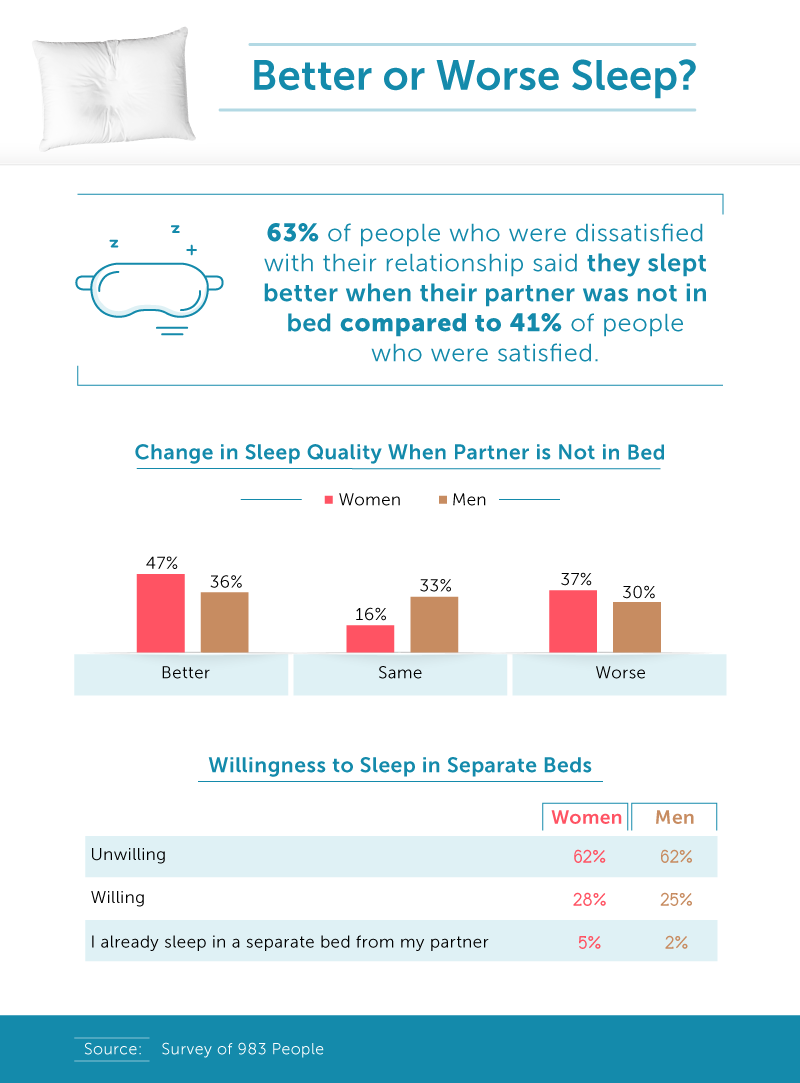 Another factor that can impact the quality of your sleep is changing up who sleeps in your bed. While some people had a hard time sleeping when their partner wasn't around, some reported it was easier to sleep when they had the bed all to themselves.

Putting It to Bed

No matter how your bedtime routine unfolds or how many bedroom rules you have in place, one thing that can make bedtime more pleasant is a quality bed. If you're looking for an upgrade, every Leesa mattress is made to order: Our mattresses never spend time sitting in a warehouse or damp storage space gathering dust and mold or lingering on a retail shelf somewhere. They are designed, built, and delivered just for you. So no matter what bedroom rules you're making (or breaking), a better night's sleep is all but guaranteed.

We surveyed 983 people through Amazon's Mechanical Turk. All of the data presented are based on self-reporting, which comes with limitations such as exaggeration and under-reporting.

Our respondents ranged in age from 19 to 81, with the average age 36.5 and a standard deviation of 11.1. Our respondents were 53 percent female and 47 percent male.

For all of the questions present, respondents were shown a preset list of responses, such as common annoyances and rules set for the bedroom. This common list was collected by posting on Reddit and utilizing Amazon's Mechanical Turk service. Respondents were also given the opportunity to write in their own responses for all questions.

Know someone who's sleeping on their bedroom etiquette? Feel free to share this with them, as long as it's for noncommercial use, that is. We ask that when sharing this content, please include a link back to the author and this study so that people can explore the full project and its methodology.