Up to $400 Off Mattresses
Discount automatically applied to the Original, Hybrid, and Legend mattresses. Excludes the Studio mattress and Bundles.

Offers not valid on previous purchases or pending orders. To qualify, all items must be purchased as part of the same order. Offers valid for orders placed directly on Leesa.com or from direct-order telephone sales. Offers not valid for purchases made at third-party retail stores. Previously purchased items currently under the one hundred (100) night trial cannot be returned and redeemed with this coupon. Cannot be combined with other offers. Additional restrictions may apply. Promotion is subject to change at any time without prior notice.

Sleeping can be a dream or quickly become a nightmare when traveling, especially if you suffer from jet lag and can't get quite enough zzz's to make up for crossing several time zones. Jet lag not only makes people sleepy but also can include headaches, cognitive problems, and (ironically) insomnia. As you might imagine, this can cause problems for people who are just trying to enjoy a getaway and can negatively impact business folks who are usually expected to be sharp and alert almost immediately upon deplaning.

We polled 1,038 people about their experiences with jet lag, when it's likely to be a problem, and what tricks people have used to try to avoid (or recover from) it. Let's take a look to see how jet lag affects, well, everybody.

Jet Lag for Everybody 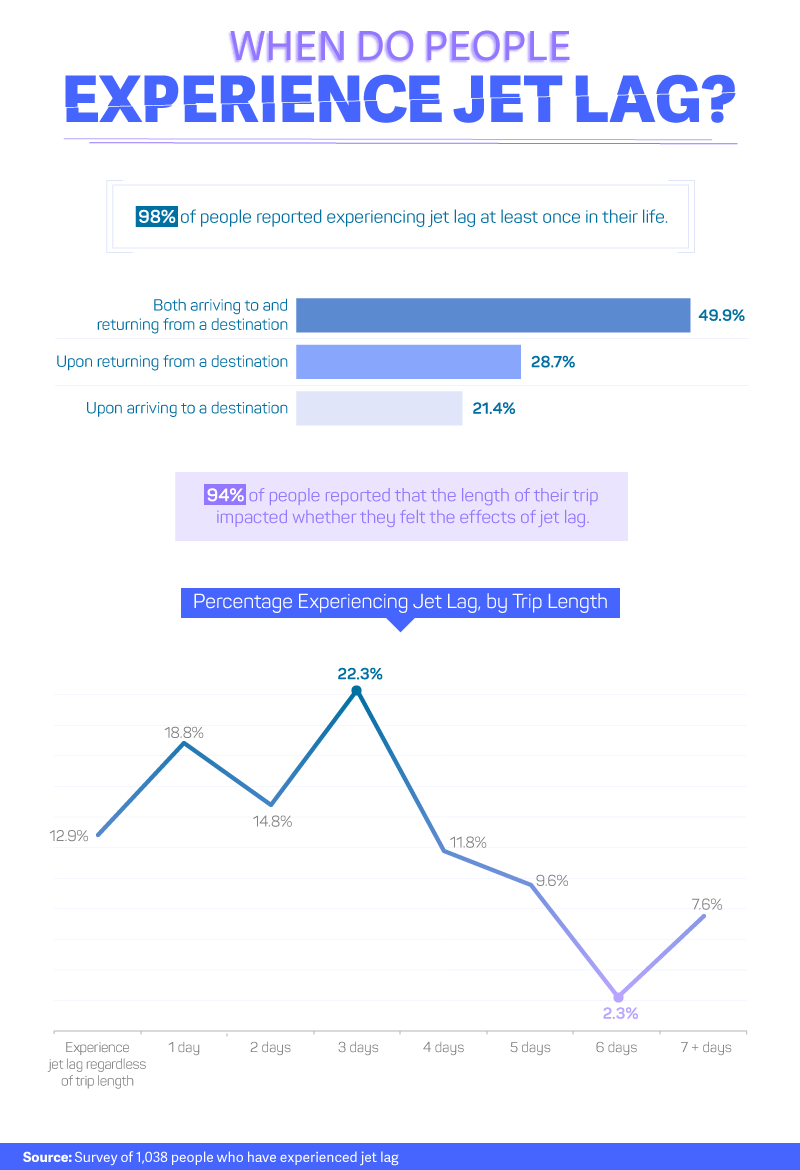 Jet lag can occur whether you're traveling across multiple time zones or just a few. The Centers for Disease Control and Prevention (CDC) reports that it's not a serious condition in and of itself, but it can make traveling difficult and cut down on vacation fun (or even business success). We asked our respondents when they were more likely to experience jet lag – traveling to their destination, traveling home, or both?

While almost 50 percent of respondents said they experienced jet lag both upon arrival and upon returning home, it turns out that the rest of those polled weren't exactly evenly divided. More reported experiencing jet lag when returning home than did when arriving at their destination. Perhaps it's the cumulative round-trip effects of travel and time zone hopping wreaking havoc on brains and bodies.

When we pared down the responses by generation, there were a few notable differences. Baby boomers, for example, were more likely to experience jet lag when they arrived at their destination (compared to Gen Xers and millennials). On the other hand, millennials were more likely than other generations to experience jet lag upon returning home. This may be because older people have a harder time adjusting to jet lag than younger people and feel the effects keenly upon arriving at their destination. 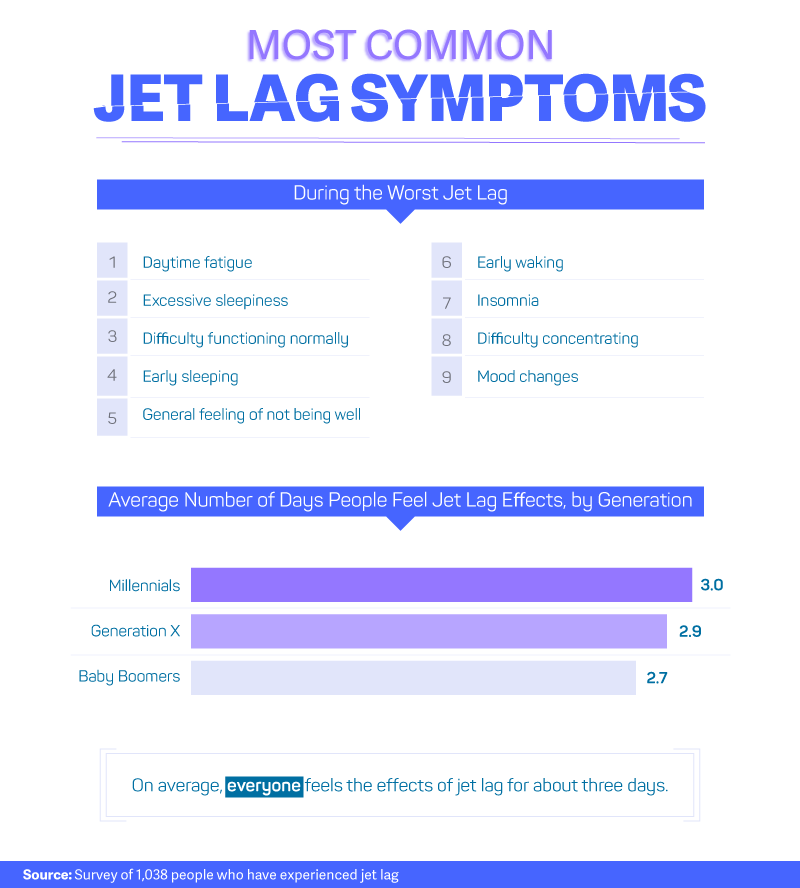 Jet lag can result in a bunch of different symptoms. Of course, it's not a stretch to realize that jet lag can make you sleepy during the day; however, it can also cause issues in other areas of your life. Waking up early is one sign of jet lag – your internal clock has yet to adjust to local time, so your brain decides to rouse you at its regular time. Insomnia is another annoying symptom. You know that it's bedtime locally, but again, your brain betrays you.

However, it may not be totally obvious that other symptoms can sneak up on those who are jet lagged. Difficulty concentrating was one problem reported by our respondents, and mood changes also got a nod from those who took our survey.

Getting Over Jet Lag 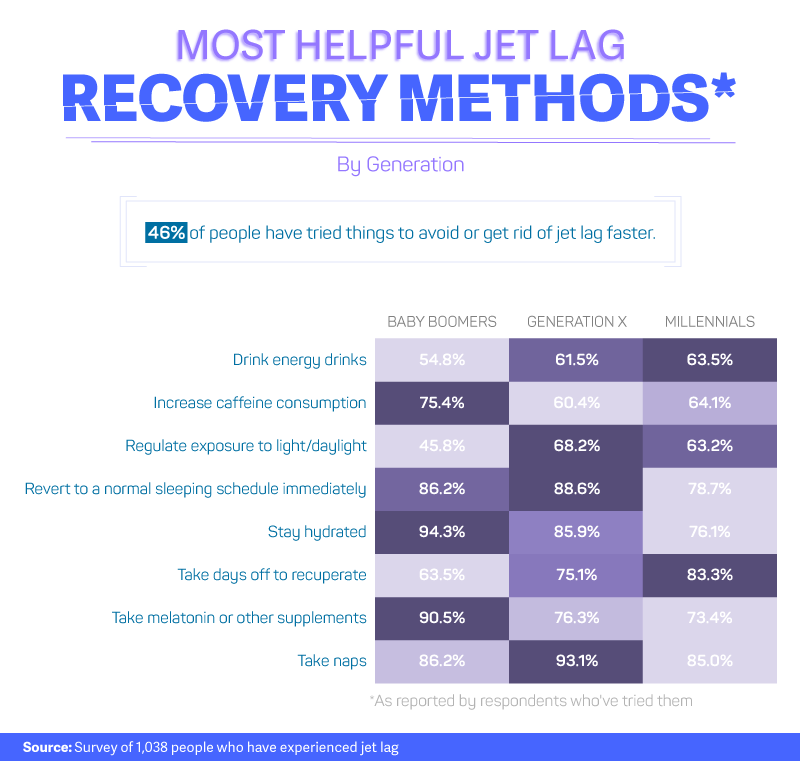 Countless articles and how-tos will give you tips and tricks on jet lag – either avoiding it or alleviating it as quickly as possible (because really, who wants to lie around in bed while there is a vacation to be enjoyed?). The CDC, for example, recommends travelers stay healthy and well-fed before travel and prepare for the time jump by adjusting their bedtimes accordingly a few days before setting out. Also, stay hydrated, avoid caffeine and alcohol, and spend plenty of time in the sun after your arrival.

Our survey found respondents reported different methods to be successful depending on their generation. Baby boomers found staying hydrated and taking melatonin or other supplements most successful for recovery. Generation X reported that napping and immediately reverting to a normal sleep schedule proved most effective for them. Millennials were the most likely group to take days off to recover and were also keen on napping (an approach that was reported to be a highly successful one for all three groups).

Other methods, like increasing caffeine consumption and chugging energy drinks, were described by participants, but these methods weren't always as successful (perhaps the CDC is on to something when recommending travelers avoid caffeine?). Also, energy drinks aren't always the Band-Aid people hope they will be, either. Among the three groups, the highest success rate for energy drinks was reported by millennials, and even then they only claimed around a 64% success rate. Taking a nap was the most successful method across generations; ultimately, though, no matter what recovery method was employed, everyone still reported feeling the jet lag blues for around three days. 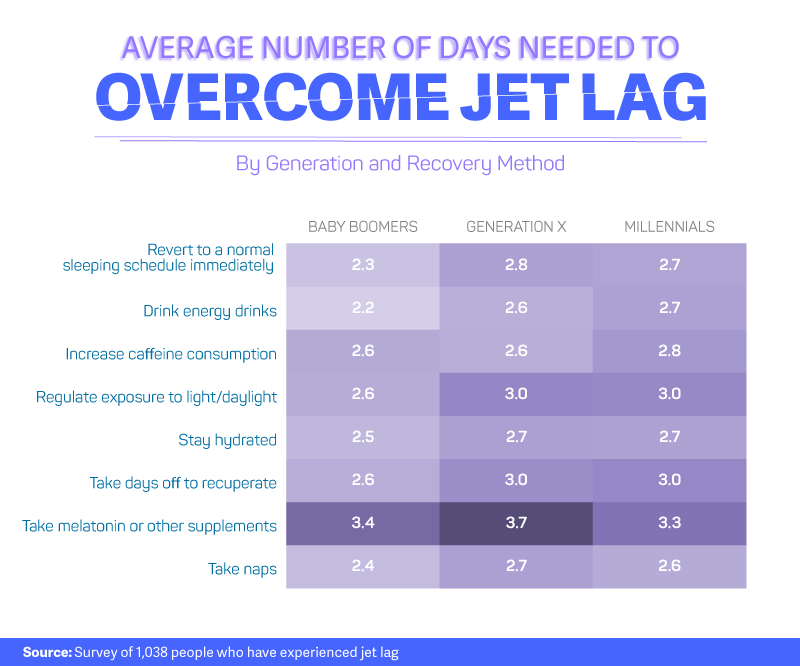 We further broke down jet lag recovery by respondent generation coupled with recovery methods. Apparently, if you're a baby boomer, drinking energy drinks might be your best bet, as they had the best results across the board. However, reverting to a normal sleep schedule had about the same amount of success for the same age group, without exposing baby boomers to potential health risks.

Another method used to try to overcome jet lag and return to regular (and restful) sleeping hours was the use of melatonin. Melatonin is a hormone that's already present in your body. It activates when the sun goes down, which renders us sleepy and ready for bed. It's also sold over the counter as a supplement, which many people use to aid in sleeping issues. However, in the case of jet lag, it didn't seem to solve any issues for our respondents. In fact, across the board, it was actually the least helpful method reported and increased recovery time for everyone. 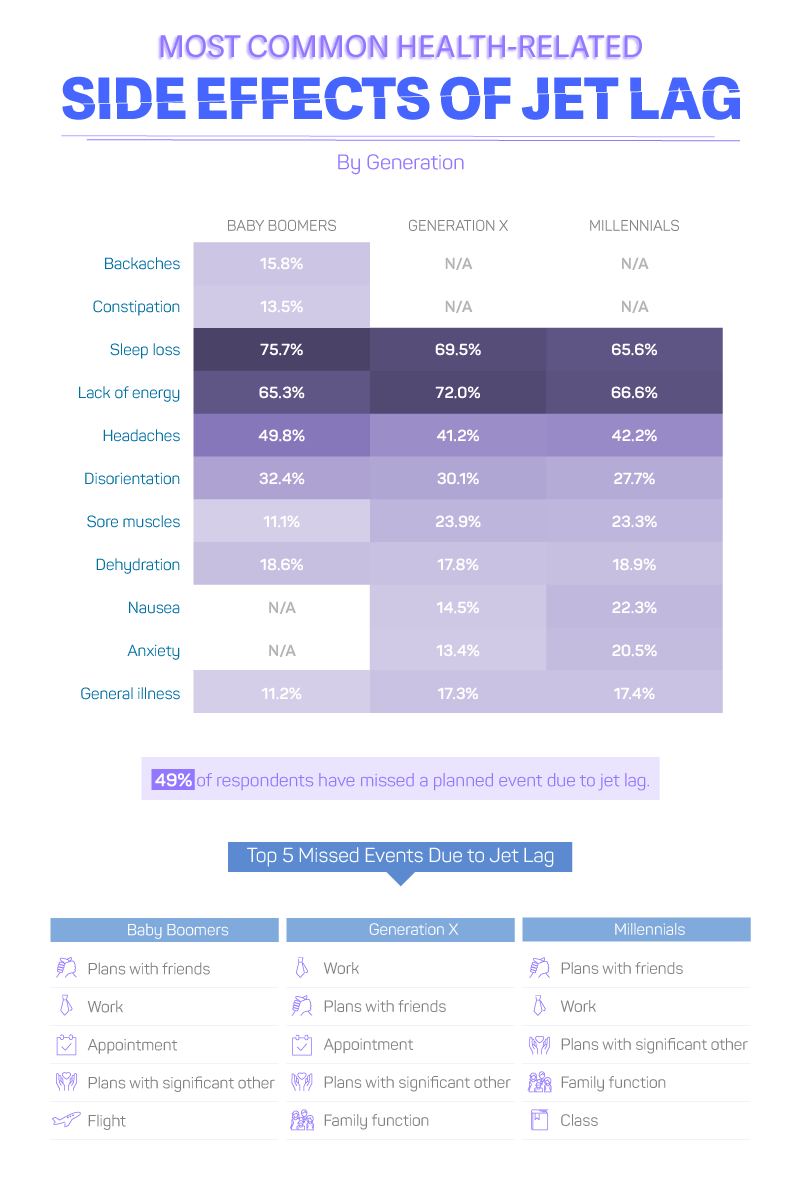 As mentioned previously, jet lag can wreak all sorts of havoc on our bodies and minds. We asked our respondents to note what negative health effects they noticed, and we paired those with respondents' generations. Unsurprisingly, a lack of energy and loss of sleep were the two most commonly cited ill effects. Headaches were mentioned by all travelers, to be sure, but seemed to occur less frequently than being tired.

Other problems included disorientation and sore muscles, and dehydration was mentioned by almost everyone as well (as we know, staying hydrated is key to cutting down on some of these symptoms). Less common symptoms, like constipation, were mentioned by a smaller percentage. However, constipation is not completely uncommon and unique among travelers, especially since the condition can be aggravated by sitting still and not drinking enough water (sound familiar?).

We also asked our respondents to think about what they may have missed out on due to jet lag. Plans with friends was a common event, as was work. Travel can impact both events either home or away, considering that people often travel for work or for pleasure. Forty-nine percent of respondents missed a planned event due to jet lag, whether it was after they arrived at their destination or after they'd returned home.

There's no doubt about it – traveling can restore the soul and help us advance our careers, but it can (and does) wreak havoc on our internal clock, especially when we're traveling over multiple time zones. Stay hydrated and keep to your normal sleep schedule to try to overcome the effects of jet lag, but keep in mind that almost everyone has to deal with it, no matter your age or reason for travel.

However, there's nothing quite like returning home and falling into a warm and delightful bed. If you're going to struggle to lift yourself out of the grip of jet lag, there's no better place to do it besides home.

If your mattress isn't quite cutting it these days, though, you might consider an upgrade in this department. At Leesa, we've redesigned the sleeping experience. Our mattresses have been specially formulated to give you the comfort, support, and universal feeling everybody needs to sleep better in every position. Try the difference for yourself with our 100-night, risk-free sleep trial or visit us at Leesa.com to learn more.

We collected responses from 1,038 people using Amazon's Mechanical Turk. 47.1% of participants were female, and 52.9% were male. Participants ranged in age from 18 to 85 with a mean of 32.5 and a standard deviation of 11.41. Participants were excluded if they had never experienced jet lag or were clearly not paying attention (e.g., failed attention check question or entered obviously inconsistent data). We weighted the data to 2017 BLS data for age and gender of Americans. No statistical testing was performed.

The data we are presenting rely on self-reporting. There are many issues with self-reported data. These issues include but are not limited to the following: selective memory, telescoping, attribution, and exaggeration.

Ready for takeoff but not the effects of jet lag? Feel free to share the results of our study with your readers for any noncommercial use. We simply ask that you add a link back to this page so that our contributors get credit for their work too.